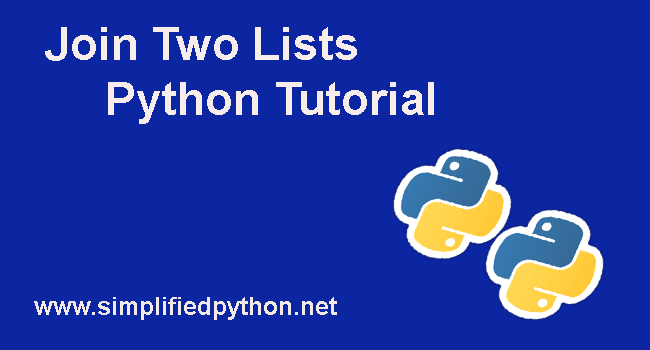 Hello everyone, in Join Two Lists Python tutorial, we will learn how to join two lists in python. Already, we know list is an important data structure of python. Joining two lists in python is very easy. So let’s see how to do them. But  before proceeding further check the previous tutorial that explain you how to create a list in python and everything related to lists.

In python, there is two ways by using that you can join two lists.

Let’s take an example, where lists are as follows –

Now we will join them.

Output of this code is –

Now, if you don’t want to store the joined lists into a separate list then what will have you to do, let’s see.

So the result is as follows.

Now we will see how to join two lists using extend() method. So understanding this we are taking an example. So let’s write the code for this.

Now see the output of this code.

Here you can see List_3 has no items because using extend() method, we can’t store the concatenation of two lists into a third list.

Now we will see an example where we will take inputs from users.

So, for this we have to write the below code.

And now, the output of this example is –

Till now we have seen only examples of integers items of a list. And now we will see how to concatenate two lists if they contain string items. So for implementing this concept we have to write the following code.

So that’s all for this Join Two Lists Python tutorial . You can leave your queries below in comment section to have a discussion about that. And please share this tutorial with your friends. Thank You.