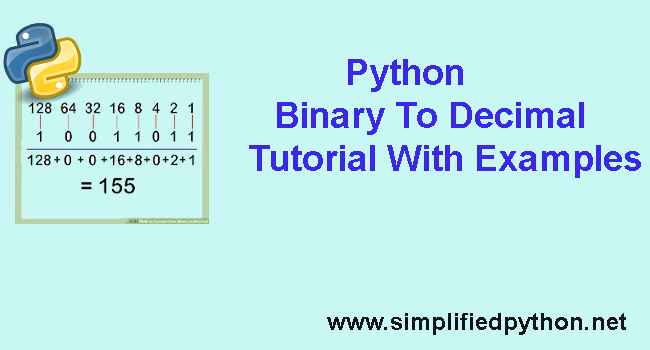 In this Python Binary To Decimal post we will talk about  some basics of number system and how to convert binary numbers into decimal numbers. But before doing this we will have to understand some basic concepts of binary number system. So let’s start.

Normally when we work in programming world, we work with binary system as well as with decimal system. So in the programming world we use binary system and decimal system but apart from this we have two more system which are octal and hexadecimal  system. Now when do we use all these stuffs ? In physical address 88-78-73-9E-74-38, the number is defined in hexadecimal number, same goes to IPv6 3ffe:1900:4545:3:200:f8ff:fe21:67cf. ,which is defined in hexadecimal numbers. In our computer we use binary format and in normal system we use decimal system. So let’s understand how can we convert these values system to another values system.

Before we go into binary to decimal conversion process, i will  teach you some basics of Binary system.

What is Binary Number System ?

Memorize at least these, this will help you to do any conversion very quickly.

Now we have to convert this number into decimal so let’s see how to do that.

Binary To Decimal Conversion Logic – What To Do

So to convert binary to decimal we have to apply the following logic.

For each digit from right to left –

So now lets to implement this logic in program.

Let’s see this concept with an example. So the code for this is –

Now you can see the result.

So, now we have converted binary numbers into decimal numbers successfully. And now we will see more methods to convert binary to decimal.

Now we will see how to convert binary into decimal using int() method.

This is very easy and code is also a few lines, so let’s see the result.

So friends, this was all about Python Binary To Decimal tutorial. I hope you will liked this and if you found it helpful then please share. And if you have any query regarding this then leave your comment, i will solve your queries. And if you like tutorials of Simplified Python then tell your friends to follow this. Thanks Everyone.