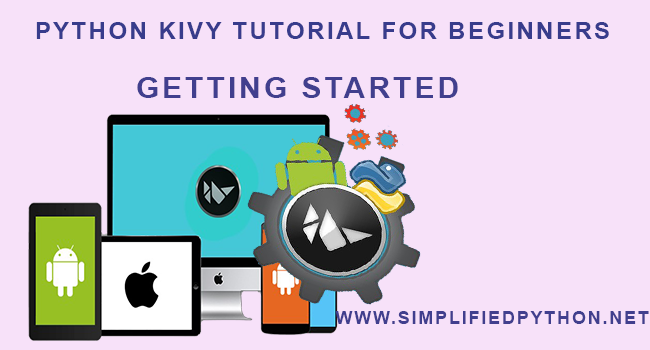 Hello programmers, are you interested in app development using python, then welcome to Python Kivy Tutorial For Beginners. In this tutorial, you will learn what is kivy, where it is used, and how to work with it in python. So let’s gets started.

Python Kivy Tutorial For Beginners – An Introduction To Kivy

If you want to learn kivy then you must have basic knowledge of following :

To use kivy, we have to download and install it. In this tutorial i am using windows so i will show you how to install kivy on windows. Anyway if you want to install it on any other OS then visit kivy’s official website. By following this site you can easily install it on your machine. So let’s do it on windows OS.

I assume that you have already installed python and pip on your machine. If not then check them first :

How to install pip on windows

1. Update the pip and wheel before installing kivy

Since PyGame is a dependency of Kivy, we’ll grab that first. PyGame is one of the original packages for creating games in Python. So now run following command.

So we have installed all dependencies successfully and now it’s time to create our first app in kivy. So let’s gets started.

So are you ready to create your app? yes then let’s do it.

The first thing we need to do is to install some modules. So write the following code on your editor(Here i am using Sublime Text 3, you can check this How to run python code on Sublime Text 3 ?).

Creating Class To Represent Our Window

Now we will create a class that will represent our window. So write the following code.

So now to make run our program we need to write the following code.

Complete Code Of My First App

So here is the complete code for the above code snippets. It looks like as below.

Now run the above code. Are you excited to see your first kivy application, then what are waiting for? let’s see.

Hey congratulations, we have created our first kivy application successfully. Have you enjoyed it? Let me know in comment section.

So guys this was all about Python Kivy Tutorial For Beginners. I hope you have enjoyed it and learned lots of useful stuffs. If yes then just help your friends by sharing this. And if you have any problem regarding this post then feel free to comment. In upcoming tutorial, you will get more kivy tutorials till then stay connected with Simplified Python. Thanks Everyone.