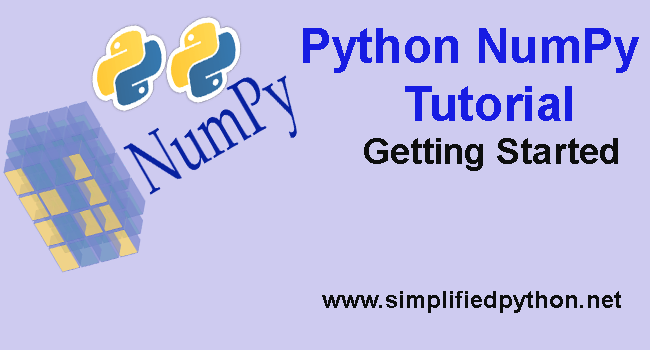 Hello everyone, in this post we will learn a very important module of python that is NumPy. NumPy is extremely popular python module in python community. It is heavily used in Scientific computing. So let’s start Python NumPy Tutorial .

In this post we will learn following concepts of NumPy :

What Exactly Is NumPy ?

It has following features –

Why We Use NumPy

Now you can see you got an error here. So how can we work with multi dimensional array because in array module we don’t have that. So the package which are using here, which is array doesn’t support multi dimensional.

The below image shows a detailed overview of NumPy datatypes.

How To Create NumPy Array

Now we will see, how to create a NumPy array in python.

First of all you have to import NumPy module. For this run the following code on terminal.

And now write the following code to create a NumPy array.

So lets see the result of NumPy array.

So now a question arise, why we use NumPy instead of a list. So answer is here –

Now i am going to prove practically that actually NumPy array is faster and more convenient than a list. So let me show you how this happen.

And now see the result –

You can see that there is a huge difference between List and numPy execution. As a result NumPy is much faster than  a List.

Now we will see it practically, so let’s start.

So now let’s check the result –

So you can see that there is quite lot of difference between them. And now it is proved that NumPy occupy less memory than list.

Ways Of Creating Arrays In NumPy

Now we will learn each ways with examples.

We can create NumPy array using array() in the following way.

The another way we have is arange().

So the code for this is following.

Now you might be thinking why dot(.) here. Because all the values here, they are float. Why float – because you are breaking the range into parts wise so this range is divided into 16 parts and normally you divide as the part you might get float value. This is awesome.

If you increase the retstep let’s say 25, then what will happen.

So see the result, this will divide the numbers into 25 parts.

And now we will see, if you don’t specify the retstep then what will happen.

It will divide the numbers into 50 parts which is by default. So lets see the result.

Till this point, we have seen 4 functions and now we have two more. This two more is actually very efficient. The first one is zeros() and second one is ones(). So let’s discuss about them.

And the output for this will be –

So this was all about Python NumPy Tutorial. In the upcoming tutorial, you will learn about advanced topics of NumPy. If you have any doubt regarding this tutorial  then please leave your comment. And please share this with others and help them. Thanks Everyone