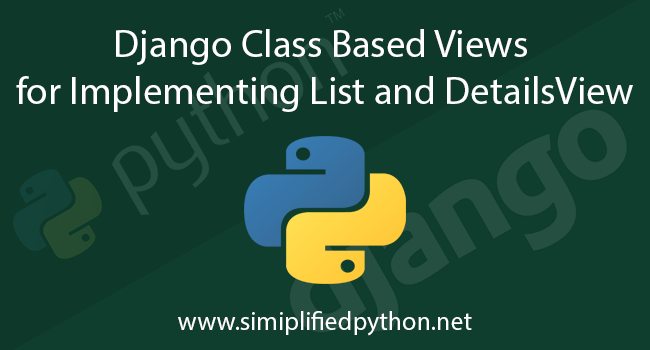 Hi there, this post is about one of the important and general features of Django and you guessed it right. Yeah, it’s about the  Django Class Based Views (Generic Views) and its usage to implement the ListView and DetailsView on a model of data. Now, you might be wondering what acutally do I  mean when I say Generic Views, Django Class Based Views, ListView and Detail View and all stuff. Hold your curiosity. I am gonna walk you through all these concepts.

These days, most of the websites follow a pattern in which one page shows a list of  things and the other page shows the details of the thing selected on the previous page.  For example, consider this very blog, simplifiedpython.net. As you visit it, you are welcomed with a list of posts which is called ListView and as you click on any post, another page shows up giving the details of the post which is called DetailView. Now, you might think that now I know what listview and detailsview are but how do I implement them. This is exactly where generic views comes into play and simplifies things.

Generic Views are basically class based views. These are usually used for the implementation of ListView and DetailView. These have inbuilt functionality and methods to simplify achieving the same. So now that you know the stuff, let’s start coding with generic views:-

As an example to learn generic views, we will be creating a webapp which would do the following:-

Creating a new App inside the Project

So thats all for this Django Class Based Views Tutorial. You can leave your comments below to have a discussion about the queries and confusions. Thank You 🙂