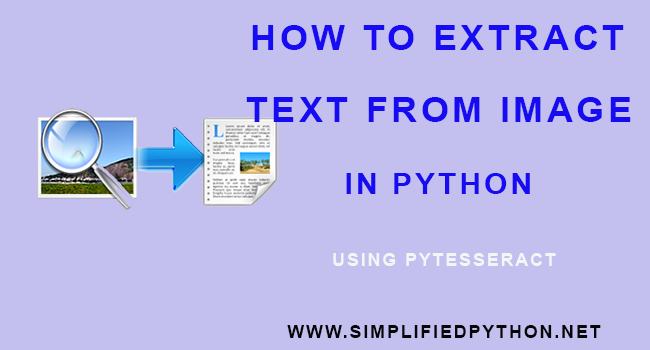 Hey everyone, welcome to How To Extract Text From Image In Python tutorial. In this tutorial, you will learn how you can extract text from a image using python. Extracting text from an image can be done with image processing. So let’s see how to do that.

What Is OCR(Optical Character Recognition) ?

How To Implement OCR ?

Now the question arises that how you can implement OCR. Python provides a tool pytesseract for OCR. That is, it will recognize and “read” the text embedded in images.

To install pytesseract, you have to run the following command in your terminal.

How To Extract Text From Image In Python

So now we will see how can we implement the program.

The first thing you need to do is to download and install tesseract on your system. Tesseract is a popular OCR engine.

Now create your project as usual. In my case, my project is like that –

Python Program For How To Extract Text From Image

This is our image, and we want to extract texts from this image.

So guys now write the following code to extract texts from above image. I will explain it later.

Now run the above code and check the output.

So guys, you can see the code is working successfully. Texts have been extracted from the image.

So this was all about How To Extract Text From Image In Python tutorial. I hope,  you will have learned lots of thing from it. But anyway if you have any confusion regarding this tutorial then feel free to ask. And please share it your friends and python learners. Thanks Everybody.