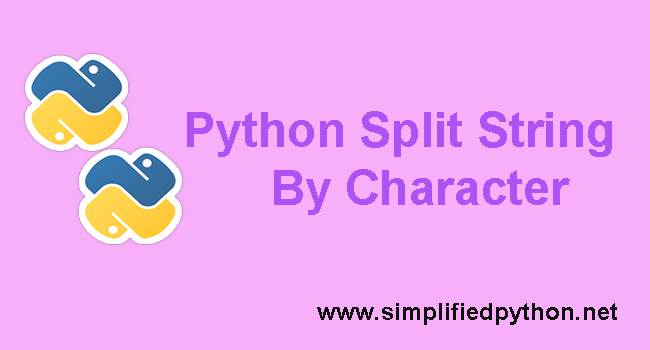 Hi everyone, in this Python Split String By Character tutorial, we will learn about how to split a string in python. Splitting string means breaking a given string into list of strings. Splitting string is a very common operation, especially in text based environment like – World Wide Web or operating in a text file. Python provides some string method for splitting strings. Let’s took a look how they works.

Python Split String By Character Tutorial – Getting Started With Examples

When splitting string, it takes one string and break it into two or more lists of substrings. Some time we may need to break a large string into smaller strings. For splitting string python provides a function called split().

What Is split() function ?

If we don’t specify any separator split() method takes any whitespace as separator.

Let’s understand it with an example.

So the output of this code is –

In the output, you can see that the string is broken up into a list of strings.

Now we will use : as a separator. Let’s see what happend.

And the output is –

You can see that the colon(:) has been removed and string is splitted.

Now we will use # as a separator, so for this the code is following.

All the # has been removed and string is splitted into list of substrings.

Now let’s see how to split string by comma. So write the following code.

You can see the string is broken up from 4th position and splitted into list of substrings.

Splitting String By  A Particular Characters

Now we will split string by a particular character. Let’s take an example “Python Is Programming Language”, and now you have to split this string at character P . So code for this is like below.

Now we will see how to split string by special characters like \n, \t and so on. Let’s implement it in examples.

Now we will see splitting string by maxsplit. It is a number, which tells us to split the string into maximum of provided number of times. So let’s move towards its implementation.

Now we will take an another example in which we will specify both separator as well as maxsplit.

And the output of this example is –

So friends, now i am wrapping up Python Split String By Character tutorial. If you have any query then please let me know this. And please share this post with your friends and suggest them to visit simplified python for best python tutorials.  Thanks Everyone.