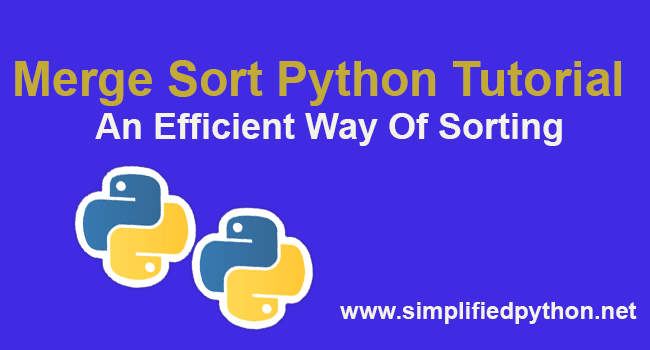 Welcome to Merge Sort Python Tutorial. In this tutorial, you will learn a very important topic of data structure that is Merge sort. Here i will cover these topics – merge sort introduction, algorithm, implementation, complexity, applications and some other concept. So let’s start merge sort in python.

We have many sorting techniques like Insertion sort, Bubble sort, selection sort. But these techniques are poor. It means, for example, for a given n which is equal to 1000 (n=1000= 103), the algorithm will take n 2  iterations that is  106

But suppose you are given a data which is more than 103 , let say 105 then your algorithm will take 1010 iterations. These algorithms will take lots of time to execute, so now time to discuss something well. So i am going to discuss a very important sorting algorithm which is also often used algorithm, which is called merge algorithm. So let’s start Merge Sort Python Tutorial.

What is Merge Sort ?

In this section you will learn, how merge sort works.

Let’s understand it with an example –

Step 1 : Now we will divide this array into two subarrays

Step 2: Now we will divide these subarrays into further subarrays

Now we have only one element in each subarray, so it’s time to merge them. We have to merge them in the same manner as had divided it, but in sorted manner.

Step 3: Now we have to compare the above two sorted subarrays and sort them.

This is our sorted array. In this way you can sort a large data using merge sort method.

Now we will see merge sort algorithm. Merge sort takes place in two parts – first one is dividing array into subarrays and then merging them in sorted order. So we will see it one by one.

Now we will see, how to implement merge sort in python practically.

The code of merge sort have two parts. So let’s start,

So the result of merge sort is following –

So that’s it for Merge Sort Python tutorial. If you found this post helpful then please SHARE it with your friends. And for any question you can leave your comments below. Thank You 🙂